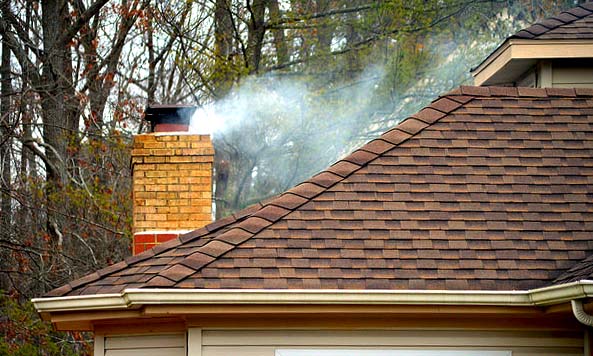 Woodsmoke from traditional log burners is a major contributor to air pollution.

A World Bank report has recommended replacing log burners with pellet heaters for domestic heating as a way of “mitigating climate change and improving air quality” with “a large emission reduction potential”.

What is smoke pollution and why is it important?

Smoke pollution is the release of gases and particles, mainly unburnt fuel, into the air from wood fires. This pollution affects both the air quality outside the house but equally importantly, it affects the air quality in the house as well. The pollution is important because it has been shown to seriously affect the health of those with respiratory and cardiac difficulties. The impact can be so great that medical professionals have begun to recommend that traditional wood fires be phased out as a form of heating in some areas.

Smoke pollution is mainly released because wood fires do not generate enough heat in the combustion chamber and, in some cases, do not adequately control the movement of air inside the chamber, resulting in incomplete burning of the fuel with the un-burnt fuel being released in the form of smoke and tiny particles. Both the gases and the particles in the smoke can be measured and it is the amount of particles in particular that can have a significant impact on the health of those in the immediate environment.

Woodsmoke has been shown to be a major contributor to the amount of both PM10 and PM2.5 in the air in many countries. In the UK, it is the largest single source of PM2.5 pollution (33% of the total) and causes 2.4 times more pollution than vehicle traffic. In California, 22% of winter PM2.5 emissions are from woodsmoke, while much closer to home in a Sydney winter, wood heaters are responsible for 48% of PM10 emissions and 60% of PM2.5 emissions, despite less that 10% of homes using a wood heater. 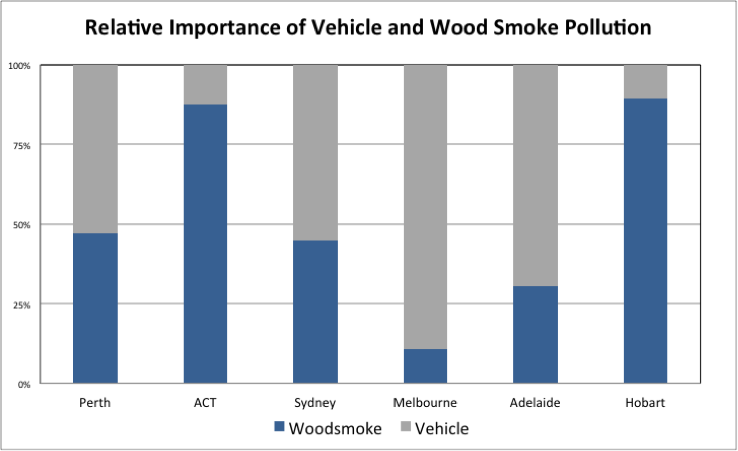 This is not to say that wood heaters are the only source of emissions. Bushfires, mining, windblown and road dust and electricity generation are all major contributors but a lot can be done to reduce the emissions from wood heaters. In particular, we can move to heaters that produce just a fraction of the emissions of the traditional log burner.

Why do traditional log burners produce so much pollution?

As previously noted, much of the pollution is caused by incomplete burning of the wood while wood with too much moisture in it can also dramatically increase the amount of pollution released. Incomplete burning is a result of poor air supply, insufficient burn temperatures and inadequate secondary burning of gases.

This is not to say that things aren’t improving. Australian standards are being slowly tightened: in 2019 new standards will come into force that specify a maximum of 1.5g of PM10 emissions for every 1 kilo of wood burned, an improvement from the current standard of 2.5g/kg. Also, the minimum efficiency of a stove (its ability to turn the energy content of the wood into actual heat) will increase to 60%.

However, numerous studies have shown that despite these improvements, actual emissions from log burners are much higher than laboratory tests suggest. That is, similar to the problems encountered when comparing vehicles lab-tested emissions with their real-word emissions, real-world operation of log burners differs from lab conditions. This can be a result of different start-up conditions (a lot of smoke pollution occurs as the fire is started), different rates of feeding in logs, different air supply to ideal conditions (vents should be left fully open for 20 minutes after adding a new log), fires left smouldering overnight, damp wood etc[1].

Estimates vary significantly, but Scott (2005) found that log burner emissions were 5 times higher than certified, Kelly (2007) found they were 3 times higher while CSIRO (2008) found they were 2.5 times higher and that average in-service log burners produce 10g/kg. WA DEC (2007) found that even a good heater operated poorly will produce around 10g/kg of emissions and more recently, BDA (2013) suggest that heaters with an average design performance of 1.2g/kg (that is, some of the best that are now on the market) will produce about 2.6g/kg in real-world operation and up to 3.9g/kg. Finally, WA DEC (2007) estimate the average wood heater in operation in Perth produces 11g/kg of emissions WA DEC (2007).

Furthermore, the moisture content of the wood has a significant impact on the amount of emissions (as well as the amount of heat output), irrespective of the quality of the log burner. Auckland Regional Council (2009) found that emissions over doubled if damp wood was used instead of dry wood and were 2.7 times higher if the wood was considered “wet” (a moisture content of 35%).

Why you should switch to pellet heaters

Pellet heaters produce a fraction of the emissions of traditional log burners because they are designed and automatically controlled to maximise efficiency and optimise burn conditions for all heat outputs. The benefit is so significant over traditional log burners that a recent World Bank report has recommended replacing them with pellet heaters for domestic heating as a way of “mitigating climate change and improving air quality” with “a large emission reduction potential”.

[1] Difference between test conditions and real-life operation in Australia are documented in Todd (2008).

[3] Pellet heaters also do not suffer the same problem of replicating lab-tested results in real-life operation because they are electronically controlled and so the way they are used does not change in a home environment.

[4] This calculation is supported by Australian government research that suggested a 98% reduction in PM2.5 emissions if pellet heaters were substituted for existing wood heaters.

View all posts by EnviroHeat Australia →